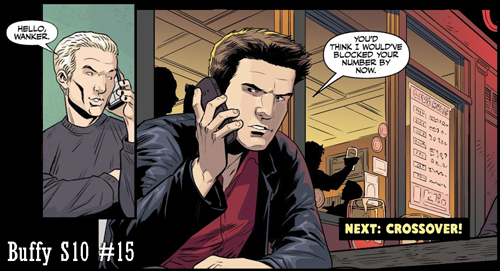 As a result of this phone call, Angel will be coming to visit the Scoobies in San Francisco. We will see what happens in tomorrow's issue. Buffy and Spike are openly in a relationship now, so awkwardness is guaranteed.

But this is not really a comics post. I'm just using the comics as an excuse to post an old Spike/Angel vid of mine, "I Hate You", which I was reminded of by those final panels of #15. It's also an anniversary of sorts: it's almost exactly a year ago that I first posted "I Hate You" on YouTube. (Sadly, it's also my most recent vid. Work on my current vid project has been on hold since the end of last year due to lack of time. I hope I'll be able to pick it up again in the summer.)

Anyway, on to the vid: